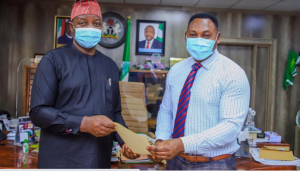 Former striker and assistant manager of the Super Eagles, Daniel Amokachi has been offered an appointment by the President Muhammadu Buhari led government as a Special Assistant on Sports.

The development was confirmed in a statement on Thursday, August 20 by the Media Office of the Minister of Youth and Sports Development.

Naija News understands that the appointment letter was also signed by the Secretary to the Government of the Federation, Boss Mustapha.

A part of the appointment letter reads, “I am pleased to inform you that Mohammadu Buhari, President of the Federal Republic of Nigeria has approved your appointment as Special Assistant on Sports. The appointment takes effect from the 11th of August, 2020.”

Meanwhile, Barcelona has announced the appointment of Ramon Planes as their new sporting director following the dismissal of Eric Abidal.