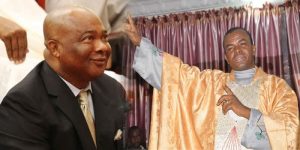 Naija News recalls that the Supreme court sacked Emeka Ihedioha as the governor of Imo state and affirmed Uzodinma as the winner of the March 9 governorship election. Giving judgment on the election January 14, a seven-man panel of justices in a unanimous decision, held that Ihedioha did not win the majority of votes cast in the election.

“The votes due to the appellant, Hope Uzodinma and the All Progressives Congress (APC) from 388 polling units were wrongly excluded from scores ascribed to them,” Justice Kekere-Ekun ruled.

Naija News had reported that a Federal High Court in Abuja, will deliver judgment on a suit asking the court to restrain Governor Hope Uzodinma from acting as Imo governor, four days after it adjourned till today.

This online news platform understands that the defendants have 30 days under the rule of law, to respond but the plaintiff told the court that he made the application for the court to abridge the time due to the urgency of the matter.

The RAP governorship candidate, who is also a lawyer, held that the matter was of constitutional importance because Uzodinma was occupying the seat of Imo governor illegally, having not participated in the 2019 election as a candidate of any political party.

With the final judgment on the matter yet to be delivered by Justice Okon Abang of the Abuja Division of the Federal High Court, reports have emerged on several online platforms (Naija News not included) that  Father has predicted that Uzodinma will be removed.

The reports quoted Father Mbaka in a new prophecy as saying that “One South East governor will be removed from office for being too proud.”

“I see one Governor from South East sacked from office for being too proud, stubborn and not accommodative…he can remedy the disgrace by changing his style now,” Father Mbaka reportedly prophesied.

However, a fact check, shows that the alleged prophecy did not emanate from the Adoration Ministry headed by Mbaka as stated by several reports. Prophecies released by Father Mbaka are always published on the Church’s Facebook page.