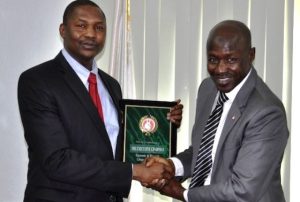 Embattled acting Chairman of the Economic and Financial Commission (EFCC), Ibrahim Magu,  debunked the report  that he refused to provide the necessary documentary evidence that would make the office of the Attorney General of the Federation commence the process of extraditing Mrs Alison-Maduake.

Speaking with regards to the allegation, Magu  said that the EFCC shared information with the National Crime Agency (NCA) of the United Kingdom.

“The NCA still shares critical information with the Commission and conducts joint operations with the Commission under the Combined Inter-Agency Task Force (CIATF) and also directly. Classified documents in this regard can be produced for sighting on request and with the consent of the NCA. The Commission is also jointly working with the NCA on several cases including the Diezani Allison-Madueke cases and all the Mutual Legal Assistance (MLA) requests on these cases are passed to the NCA and the Crown Prosecution Services through the Centra Authority Unit (CAD) of the Ministry of Justice contrary to the allegations of the HAGF,” Mr Magu wrote.

He added that following the delay by UK authorities to charge Mrs Alison-Madueke, the EFCC wrote to the authorities in the country through the AGF requesting the extradition of the former petroleum minister so she can face pending charges in Nigeria.

He added that Mr Malami has yet to communicate with the commission the position of UK authorities on the request it made.

Contrary to the claim made against him by Mr Malami, Mr Magu told the probe panel that under his leadership, “the EFCC maintained a good working relationship with the United States Federal Bureau of Investigation.

Meanwhile, In a latest Development, The agency’s Secretary, Olanipekun Olukoyede has been suspended indefinitely.