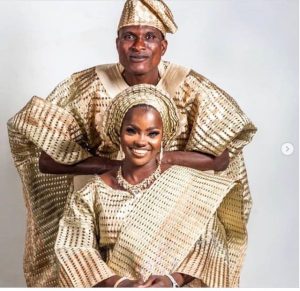 The mother of the two blue-eyed girls, Risikat Azeez, who recently reunited with her husband, Abdul-Wasiu Omo-Dada has been given another a breathtaking treatment by some concerned Nigerians.

Naija News recalls that First Lady of Kwara State, Olufolake Abdulrazaq, has offered to help the two blue-eyed girls, and their mother Risikat Azeez, after reports emerged that her husband walked out of their marriage because of their special look.

The aforementioned statement was further proven with the above stunning new photo of the couple wearing matching traditional outfits which was shared on Instagram with the caption;

This is coming one week after Wasiu in an interview with Punch, denied the allegation that he abandoned his family.

According to him, he fell in love with Risikat because of her eyes and that he never regrets having daughters with blue eyes.

He also revealed that he started having issues with her after they posted a photo of his kids on Facebook to beg for alms.

So Mrs.Risikat took her husband back… * *I don’t know anything about marriage so my opinion won’t count. If it makes her happy then