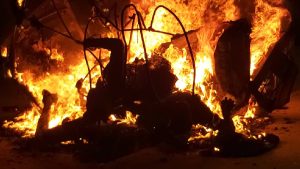 Residents of Riban Garmu, a village in Kirfi Local Government Area of Bauchi State have been left in tears after a night fire outbreak burnt to death a mother and her two children.

Confirming the incident to newsmen, an eyewitness who wished to remain anonymous said the fire was suspected to be as a result of an electric spark in the apartment.

“We suspect that there was a spark in the night while people were asleep and that might have caused the fire which burnt the four-bedroom house completely,” the source said.

He revealed that the survivals are currently receiving treatment at the Kirfi General Hospital.

Naija News learnt that the fire broke out when deceased and her two children were resting in their apartment in the night. However, efforts to forcefully open the door and save them from the blazing fire, proof abortive.

“They were crying and screaming for help inside the room but no one could open the door up to the time the fire consumed them,” the eyewitness added.

A member of the Bauchi State House of Assembly, Abdulkadir Dewu, representing Kirfi Constituency, was said to have visited the scene of the incident.

Dewi sympathized with the family of the victims on behalf of the State Governor Senator Bala Mohammed. He expressed shock at the incident which claimed a mother and her two children in the same day.

The lawmaker admonished the family of the victims to take accept the occurrence as an act of God even as he prayed to Almighty Allah to stop a re-occurrence of the incident.

On his part, Governor Bala Mohammed who was represented by Dewu, also sympathized with the family of the deceased as he donated N250,000.

Mohammed prayed to God to grant the victim’s family fortitude to bear the loss. He, however, cautioned the community against using fire indiscriminately especially during this period.

Meanwhile, the identity of the 18-year-old girl who died in a sex romp allegedly involving some government officials at Yobe State government lodge a few days ago has been revealed, Naija News reports.