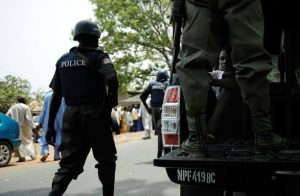 Six months after Rivers State Police Command announced that it rescued twenty-four babies from a baby factory at the Woji area of Obio-Akpor Local government area of the state, the command has again rescued a day old child and arrested seven people at a newly discovered baby factory at Igwuruta, in the Ikwerre Local Government Area of the state.

Naija News learnt that the father of the day-old child was also among suspects arrested, as findings made it clear that he had arranged for the sale of his newborn baby boy for N900,000.

The development was confirmed to newsmen on Tuesday, August 11 by the command’s spokesman, Nnamdi Omoni while parading the suspects at the Port Harcourt.

“Operatives of the Special Anti-Robbery Squad, acting on a tip-off, swooped on the suspects, including the owner of the baby factory, just when the agreed sum of N900,000 for the baby boy was paid in two tranches of N600,000 and N300,000 to the go-betweens,” Omoni revealed.

He added, “the baby was born less than 24-hours before it was sold. This conspiracy was between the father of the baby boy and the prospective buyers.”

The PS confirmed that all the suspects in custody had confessed their parts in the allegation against them.

Meanwhile, Mr Abdul-Wasiu Omo-Dada, the father of the two blue-eyed girls from Kwara State has narrated his own side of the story against the report that he abandoned his wife Risikat Azeez, with the children.

Naija News reports that Dada in a recent interview with The PUNCH said he never abandoned his family as insinuated by his wife and people who had supported her.