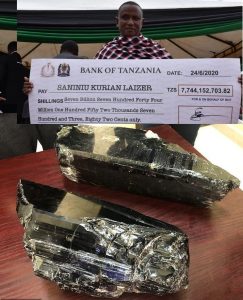 In what has been described as a miracle, a Tanzanian miner has dug up two huge gemstones worth millions of dollars.

The father of thirty children ran into luck after he discovered the rare stones weighed 9.2kg and 5.8kg while digging at a mining site in the north of the country.

As seen in the above image, the man whose name is identified as Saniniu Laizer was handed a cheque of 7.74 billion Tanzanian shillings, equal to $3.35million by the Tanzanian government for the two massive dark violet-blue rare stones.

Naija News learnt that Laizer was rewarded with the huge sum of money in check during a trading event in Manyara on Wednesday, June 24 for the gemstones.

Reports gathered that Laizer has 30 children and four wives. He has, however, vowed to use part of the money to build a school and a shopping mall in his community, considering the fact that most parents in the community can not afford to pay for their children’s education.

In another news, Naija News reported that a 35-year-old housewife, Omolara Seriki, a resident of a community in Osun State has damaged the scrotum of her husband, Raheem Seriki following a disagreement between them on alleged infidelity.