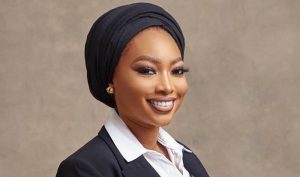 Reports the Former Oyo State Governor, Abiola Ajimobi has died from COVID-19 has been dismissed by his daughter in law, Fatimah-Ganduje Ajimobi.

Recall it was reported earlier Ajimobi has reportedly died at the age of 70.

Reacting however, Fatimah dismissed the reports as untrue.

Thank you for all the messages but our father is still alive, alhamdulillah. When it is our time we will all die so wait first…