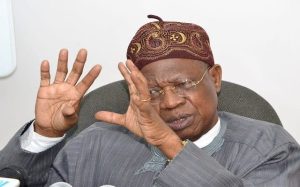 The Nigerian government has said that the extension of rail construction from Lagos-Kano-Katsina to Marradi was intended for the country to take economic advantages of import and export in the Niger Republic.

According to the Minister of Information and Culture, Alhaji Lai Mohammed who made the disclosure on Friday, October 2, when he featured on Nigeria Television Authority live programme, “Good Morning Nigeria”, the extension was deliberate for the benefit of the country’s economy.

Mohammed reiterated that the extension would be to the interest of Nigeria’s economy through importation and exportation in the Niger Republic, Chad and Burkina Fasso, which are landlocked countries.

Naija News understands that the minister’s explanation was coming after some citizens had queried the rationale behind Nigeria borrowing to fund the infrastructure of a neighbouring country.

“I think there has been a lot of disinformation and total lack of information over that linking of Lagos, Kano, Katsina railway to Marradi,” said Lai Mohammed.

He explained further that “The wisdom behind it is that Niger, Chad Burkina Faso are all landlocked meaning that they do not have access to sea.

“The simple reason, therefore, is to strengthen the economy of Nigeria.”

The minister added, “For now, Niger Republic used seaport of Benin Republic, Togo and Ghana and the exporters go through the stress, challenges and time of being on the road from Cotonue, Lome or Accra to their country.

“But by the time we link them from Katsina to Marradi, it will be easier for us to take over the business.

“There is nothing like territorial expansion, it is purely economic, we are taking advantage of the proximity and efficiency of rail system.”