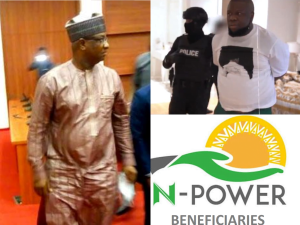 Nigerians welcomed the relaxation of the travel ban this week with open arms and joy in their hearts. The Application website of the  N-Power scheme was also bombarded by 3 million Nigerians. The internet also went into a frenzy once again over the extradition of a popular internet sensation, Ramon Olorunwa Abbas better known as Hushpuppi. Naija News brings you a round-up of the major events and happenings in Nigeria last week.

On Monday, President Muhammadu Buhari extended phase two of eased lockdown by another four weeks with effect from tomorrow Tuesday, June 30 through midnight of Monday, July 27, 2020. He also announced that the ban on interstate movement had been lifted with effect from July 1, 2020. This enabled Nigerians who had been trapped in different parts of the country to move to their desired states thereby reuniting with their loved ones.

The Nigerian Senate on Tuesday engaged in a war of words with the Minister of State for labour and employment, Festus Keyamo over the planned recruitment of 774,000 Nigerians.

The lawmakers disagreed with the Minister when he disclosed President Muhammadu Buhari had mandated his ministry to supervise the recruitment.

The Senators, however, disagreed with him, leading to a war of words between the two parties.

In her ruling, Justice Binta Nyako ordered that Wadume and six others be immediately transferred from the custody of the Special Anti-Robbery Squad, SARS, a unit of the Nigeria Police Force (NPF) to Kuje Correctional facility.

Hushpuppi And Woodberry Extradited To The US

On Thursday, Instagram sensation, Hushpuppi, and his ally Olalekan Jacon Ponle, better known as Woodberry were extradited to the United States. The two Nigerians were arrested in June by a team of highly trained Dubai police officers over alleged internet fraud activities, Naija News recalls.

More than three million Nigerians have applied for employment as beneficiaries of the Batch C N-Power scheme since the portal opened on June 26.

Former Senate President, Bukola Saraki, on Saturday, berated the ruling All Progressives Congress (APC) for linking him with the cybercrime suspect, Ramon Abbas, better known as Hushpuppi. Saraki described the statement linking him to Hushpuppi as “irresponsible and cheap politics.”

Saraki said: “The statement credited to the APC, the ruling party in our country, is one of the ways by which our anti-graft agencies are weakened and why the fight against corruption in the country is often viewed with suspicion by the international community,” the statement read.