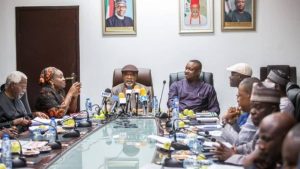 The Minister of Labour, Chris Ngige, will on Saturday meet with representatives of the Nigeria Labour Congress (NLC), the Trade Union Congress (TUC) and members of Civil Society Organisations.

Ngige made this known in an interview with State House correspondents after a meeting he held with President Muhammadu Buhari, at the Presidential Villa, on Friday.

The Minister stated that the meeting will discuss ways to end incessant industrial actions by workers.

The government official sttaed that he was in the State House to brief Buhari on the recent strike by National Association of Resident Doctors (NARD).

Ngige said, “The President has approved for us to have a bigger government side meeting with the organised labour.

“All government institutions that have to do with the finances of government will join us to meet with them and show them the books.

“So, the invitation is going out to them this afternoon (Friday), the Nigeria Labour Congress, the Trade Union Congress and their affiliates or supporters and friends in the Civil Society Organisations.

“The meeting is scheduled for tomorrow (Saturday), so, I will relate more with the Chief of Staff to the President and the leadership of the unions today so that we do this meeting tomorrow.

“At the meeting, government finances, challenges and everything will be laid bare on the table. They will also table their own fears and what they think is also good for the Nigerian people especially the workers, so that we look at them.”