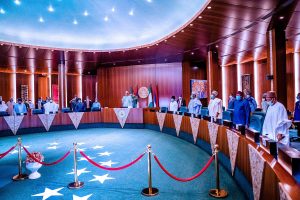 The list of the All Progressives Congress (APC) 13-member Caretaker and Extraordinary National Convention Committee has emerged.

Naija News reports that the APC, Nigeria’s ruling party, appointed the Caretaker Committee members on Thursday in Abuja, the nation’s capital following the dissolution of its National Working Committee (NWC).

The NWC was dissolved at the APC National Executive Council (NEC) meeting chaired by President Muhammadu Buhari at the Presidential Villa, Aso Rock.

The NEC  of the ruling party also resolved to hold an extraordinary national convention in six months, where the APC is expected to replace its current national leadership headed by Adams Oshiomhole, its suspended National Chairman.

APC had named Yobe State Governor, Mai-Mala Buni, as the chairman of the committee. The Yobe Governor was immediately sworn in by the Attorney General of the Federation and Minister of Justice, Abubakar Malami.

Below is the list of APC Caretaker Committee and Extraordinary  Convention Planning Committee.