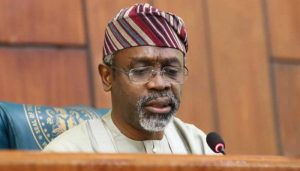 The Speaker of the House of Representatives, Femi Gbajabiamila has ordered for the withdrawal of National Water Resource Bill.

He gave the order following a motion by Rep. Benjamin Mzondu representing Makurdi/Guma Federal Constituency. Mzondu had argued that since the Bill was passed, it had been met by public outcry and its breach of House’ Rules.

Mzondu cited Order 6, Rule 1(1), 2 and 3, as he argued against the transmission of the Bill to the Senate and its finally becoming law.

According to him, “I wish to refer to Order 6, Rule 1(1), 2 and 3 and Order 12, Rule 18 to state that I was deprived of my legislative Privilege of sighting a gazetted copy of the National Water Resources BillHB 921, and such could not participate in the consideration of the report by the Committee of the Whole, which also deprived me of my rights and privilege of representation to my people.”

“Mr. Speaker, Hon. Colleagues, it is in the effort to eliminate the “Element of Surprise”, that the House in its wisdom, included in its Standing Rule, that every Bill, must be gazetted or clean copies circulated. It is important to note that the word emphasized here, is “gazette”, which means appearing in the Bills Journal of the House.

“The words used are clear and unambiguous, they ought to be given their ordinary meaning, as stated.

“The laws lay, on your shoulder to interpret these rules as stated in Order 7 Rule 1(7). It is important to emphasize that I have painstakingly searched through all the journals of the House, and cannot find where the Bill is gazetted and I stand to be challenged or corrected.

“The next question for your consideration, Hon. Speaker, deals with jurisdiction, whether the House such powers to entertain a bill, such proceedings become a nullity, ab initio no matter how conducted and decided”.

”So having not met this condition, I wish to move, relying on Order8 Rule 8 and the above-stated rules, that “The House do rescind/expunge its decision of 23rd July 2020, which adopted the National Water Resources Bill, 2020 HB921 to have been read the Third time from our records”.

The Speaker thereafter granted his prayers, “fundamental issues have been raised by Hon. Mzondu. He has backed them up, with a clear language, that such bills, must be re-gazetted”, Gbajabiamila said.