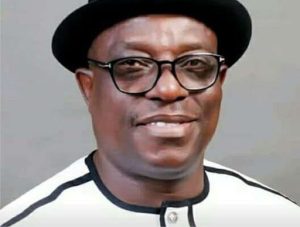 Victor Giadom, the acting National Chairman of the All Progressives Congress (APC), has said the national executive committee (NEC) meeting was called to resolve issues rocking the ruling party.

Speaking to Channels TV on Wednesday, the former Deputy Secretary of the APC expressed concern that some leaders of the party may refuse to surrender to the “highest organ” of the APC.

The embattle Giadom revealed that he has invited President Muhammadu Buhari, adding that he expects the president to attend the virtual meeting.

He said: “First, the agenda is to look at the ongoing crisis in the party and find solution to them. My position is very clear. The national working committee cannot resolve the present situation in our party.

“A higher organ of the party which is the national executive committee of the party has the responsibility to wade into the situation that we find ourselves.

“But I am worried about some of my colleagues who do not want to surrender the situation that we find ourselves to a higher organ of the party that can find solution for all of us.

“I, therefore, want to advise everybody, my colleagues and the entire NEC members to avail themselves to the zoom code that has been circulated to them and attend the meeting as scheduled.”

Giadom also denied knowledge of any intention to dissolve the National Working Committee (NWC) of the APC.

“NEC will decide, I am not aware there is any intention to dissolve the national working committee, that is not before me. That is why is at the meeting that a collective decision of the entire NEC will prevail at the end of the day,” he said.

Naija News reports that President Buhari on Wednesday backed Giadom as the authentic Chairman of the APC, Vowing to attend the NEC meeting he scheduled to hold at Aso Villa.

Recall that the ruling party has been engulfed in crisis following the suspension of Comrade Adams Oshiomhole as the APC National Chairman by an Appeal Court.