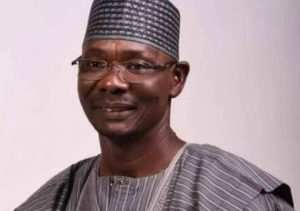 Governor Abdullahi Sule of Nasarawa State has denied reports that he was plotting with the chief of staff to President Muhammadu Buhari, Prof Ibrahim Gambari to stop the appointment Silas Agara as Chairman, National Population Commission (NPC).

Naija News reports that Silas Agara is the immediate past deputy governor of Nasarawa State.

A publication by SaharaReporters had claimed that Governor Sule was working against a Christian being appointed to head the NPC.

“Some officials with the Nigerian government are making frantic moved to replace Ali Silas Agara, a Christian from Nasarawa state nominated to take over as chairman of NPC, with a Muslim from Kano state.

“Governor of Nasarawa state and chief of staff to the President had told the President not to handover NPC to a Christian, there is a plan to replace Agara with a Muslim, Kura Isa from Kano,” the report had claimed.

Reacting in a statement by his chief press secretary, Ibrahim Addra, Sule described the report as false.

“We are equally appalled by the religious slant being introduced at a time all well-meaning citizens are working to build bridges across divides, especially in Nasarawa State.

“Matters of appointment of individuals into positions such as the one in question are the preserve of President Muhammadu Buhari, so to suggest pressure from Governor Abdullahi Sule in that respect or an alleged plan is laughable.

“Governor Sule’s antecedents, predisposition, exposure and world view do not cast him in the mould of a bigot that is being speculated. The recent appointment of Mr. Henry Omaku a Christian, as ambassador representing the state negates the impression that the story seeks to create.

“Those who know Engr. Sule or have interacted with him would be having a good laugh at this misadventure.

“This allegation is a desperate attempt to distract Engr. Abdullahi Sule from delivering on his promises to the people of Nasarawa State, such attempts shall fail,” he said.