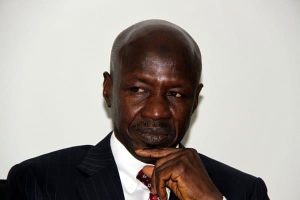 The president of the Arewa Youths Consultative Forum (AYCF), Yerima Shettima has labelled Ibrahim Magu as the worst leader the Economic and Financial Crimes Commission (EFCC) has had so far.

This he said as he lamented that EFCC in the hands of Magu had been turned to a witch-hunting tool by politicians.

Naija News recalls the embattled Magu is facing questioning before a presidential investigative panel hearing the allegations of gross misconduct, financial recklessness and abuse of office levelled against him.

The panel is headed by Justice Ayo Salami and had been sitting in the presidential villa since Monday.

Reacting to the ongoing saga, the AYCF leader, Shettima in a chat with Daily Post said the EFCC under Magu’s watch had fallen below the standard set by previous chairmen of the anti-graft agency.

According to Shettima: “Yes, we have seen it to be a case of selective justice, there are so many drama going on and to an extent that Magu is witch-hunting perceived opposition. EFCC has not really met the standard compared to what was obtained during the era of Lamorde that did not go into much propaganda but you could feel the action compared to Magu.

“Lamorde was one of the best we had then followed by Ribadu but this is one of the worst of it.

“The attention of the social media was strong on this one and once an issue arises, the media gives him a very good cover which is not good.”

It will be recalled before Magu was summoned by the investigative panel, Abubakar Malami, Nigeria’s Attorney General and Minister of Justice had submitted a petition against him to President Muhammadu Buhari where he was among other things, accused of re-looting recovered funds.

Magu has since been suspended from office pending the outcome of investigations while the anti-graft agency had picked Mohammed Umar to head the Commission in his absence.