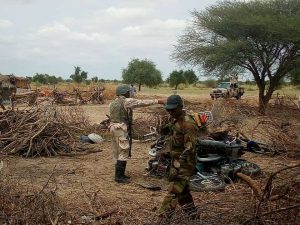 Some parts of the Borno State capital, Maiduguri on Tuesday evening experienced heavy explosions as well as sounds of multiple gunshots.

The sounds which were heard around Giwa military barracks reportedly started at about 5:45 pm and were still being heard as at the time of filing this report.

According to sources quoted by Vanguard, the gunshots, explosions, and sounds were caused by the clash between the military and armed insurgents attempting to overrun the city.

Earlier, Naija News had reported that troops of the Nigerian Army have recaptured Marte, an area in Borno state, from the hold of suspected members of the Islamic State in West African Province (ISWAP) – a faction of Boko Haram.

This was confirmed to TheCable on Tuesday by the spokesperson of the Army, Mohammed Yerima.

“Yes, we have recaptured the area,” he said.