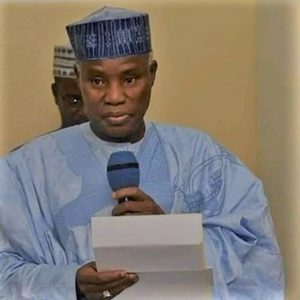 The federal government has said it cannot sit down and allow governors to talk the way they want, asking them to play their part in tackling banditry.

The Minister of Defence, Maj. Gen. Bashir Salihi Magashi (Rtd) made this known on Saturday in Kano after revalidating his APC membership at his Galadanchi ward of Gwale LGA of Kano State.

He urged governors and other representatives to play their part in tackling banditry and other security challenges bedeviling the nation.

Magashi maintained that the federal government remains committed to securing the lives and properties.

“But crying that we should do that or should not do that will not solve the problem. Let everybody go back to his people. Everybody, I mean, all political office holders should go back to their localities and see what is happening there. There is poverty, there is neglect, there is no school, no healthcare centres, nothing!

“So, if they can concentrate on that alone, I think the nation will be better of.”

On the EndSARS protest in Lagos, the Minister said, “Whoever is involved in this EndSARS issue, the military and the government will not allow it to happen. But we will be as good as any other citizen to protect this country.

“We are not going to be harsh on anybody. We will maintain the law and peace to the best of our ability. We can use force when it is required. When you use force, we don’t say you will go and start killing people. We can use minimum force commiserate with what is seen on the ground. And that is where some people are getting it wrong.

“We can not sit down and then you shoot at somebody and we allow you to go because somebody thinks that you are one that can kill and go away. Please give us time, in this country, we are in a state where we want everybody to look up and see what he can do for this country, not what the country can do for you.”