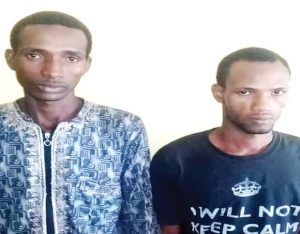 Two Fulani herdsmen have been arrested in Ogun State for allegedly robbing one Amina Okeshola of N140,000 and as well gang-raped her daughter.

According to the report confirmed by the State Police Command through its spokesman, Abimbola Oyeyemi, the two suspects, Abu Adamu and Muhammadu Aliyu were apprehended following a distress call to the Ewekoro Divisional Headquarters around 1 am on Wednesday, September 9.

Naija News learnt that the herdsmen invaded the woman’s farm which is located someone in the Ewekoro Local Government Area of the state and assaulted her daughter who is said to be 16 years of age.

Speaking on the incident, Oyeyemi in a statement released on Sunday, September 13 said: “the suspects invaded a farm settlement at Afowowa Gbelu, dispossessed one Amina Okeshola of N140,000 and gang-raped her 16-year-old daughter on the cassava plantation.”

“They were arrested for robbery and rape after a distress call was received by the police at the Ewekoro Divisional Headquarters around 1 am,” the PPRO noted.

Oyeyemi narrated that the police command was informed that some armed men suspected to be herdsmen invaded a farm settlement at Afowowa Gbelu village in the Ewekoro Local Government Area of the state and were attacking a family living in the farm settlement.

His statement reads; “The suspects ransacked the house of one Aminat Okeshola, dispossessed the family of the sum of N140,000, after which they took the 16-year-old daughter of the family to the cassava plantation, where they took turns to forcefully have sex with her.

“On the strength of the distress call, policemen from the Ewekoro Division swiftly moved to the scene, combed the entire area and succeeded in arresting two of the suspects, who were hiding in the nearby bush on sighting the policemen, while the third one escaped. The two arrested suspects were immediately identified by the victims.”

According to him, a preliminary investigation revealed that the suspects had always been passing through the farm settlement with their cattle in the daytime before they came back to attack the farmers on the reported day.

Reacting to the incident, the state Commissioner of Police, Edward Ajogun, ordered a manhunt for other members of the gang who fled during the arrest. He also directed the immediate transfer of the case to the state Criminal Investigation and Intelligence Department for discreet investigation and prosecution, Oyeyemi revealed.