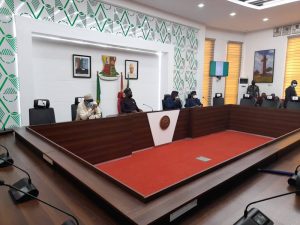 South-West governors and prominent traditional rulers in the region on Saturday kicked against open grazing by Fulani herdsmen.

The South-west leaders arrived at the decision during a meeting at the Government House, Ibadan, the Oyo State capital, to proffer solutions to the lingering security problems in the region.

The meeting equally had in attendance the Deputy Inspector-General of Police in charge of South-West, David Folawiyo, the Commissioner of Police in Oyo State, Mrs Ngozi Onadeko, and other heads of security organisations in the state.

Speaking to newsmen after the meeting, Governor Akeredolu said they unanimously agreed that open grazing had become archaic and unsustainable and must therefore be stopped.

He said they also called on the Federal Government to improve border security and check the influx of foreign herdsmen, who many have blamed for armed robberies, killings, kidnappings and rape, among other criminal activities in the region.

“But things that will lead to open grazing in these modern times must be looked at and the state and Federal Government, in particular, should give support as much as we can to cattle breeders.

“We all agreed that our borders have become too porous and that we need to do something urgently to prevent foreign herdsmen from coming into this country without any form of caution. This is because a number of them have come in with their herds and what they do is of concern to us.

“We all believe that our borders need to be checked and we need to tighten our borders so that all those foreigners from Niger Republic and those beyond bordering states don’t come in with their herds and destroy our farms.

“We all agreed that the time is now that we support the decision of National Economic Council about forest management and that they believe that all the states should be in a position to manage their forest. This will give enough room for you to determine who is there, what purpose are they serving, and where you have people illegally. The state should be able to take some steps so that you can preserve our forest.”