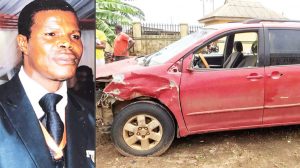 Tragedy struck in the Ikorodu North Local Government Area of Lagos State, in the early hours of today when an angry mob allegedly stoned a businessman, Usman Yamah to death.

Yamah was said to have made an attempt to escape for his life after the incident, and sped off.

However, a group of motorcyclists, angered by that action became violent, mounted their motorcycles and gave him, a hot chase till he was intercepted around Elepe on the Ijede Road.

Some eyewitness said he was stabbed to death, another stated that the men stoned the victim to death in broad daylight.

A resident of the area, Segun Ogunyemi, noted that the partially sighted man was still alive and fine, adding that the mob took laws into their hands by attacking and killing the man.

He said, “Some motorcyclists stabbed a man to death on Monday. The man went to Ikorodu and on his way back, he hit someone with his vehicle and the victim fell, but did not die. So, the motorcyclists trailed him from where he hit the person to Elepe, where there are potholes on the road.

“The man had to slow down because of the bad road and it was at that point that they got him. They smashed the windscreen of his vehicle, brought out their daggers, pulled the man out and stabbed him four times in his stomach and he died on the spot. The police have taken the corpse to the mortuary.”

Abdulmalik, Yamah’s son narrated the account he got, noted that his family had been thrown into mourning.

He said his father’s mechanic called him to say his father was stoned to death by some motorcyclist. “ According to him, someone, who worked with my dad, informed him that he was driving and he hit a partially sighted man without knowing it. So, while driving, he noticed that some motorcyclists were chasing him and on getting to Elepe, they caught up with him and he was killed.

“The policemen, who were at the scene of the incident, said they gathered that the partially sighted man did not die, but suffered minor bruises. My uncle even visited the point where my father hit the man and acted as if he was not a member of our family when he was interrogating a motorcyclist about the incident. The motorcyclist said my father was killed for no just cause, because the man he hit did not die.

“The motorcyclists vandalised his vehicle, killed him and ran away. When I saw his corpse, his head was swollen and had bruises. His limbs were also cut off. My mother and three siblings have been crying because my father was the breadwinner of the family. We want the government to help us get justice.”