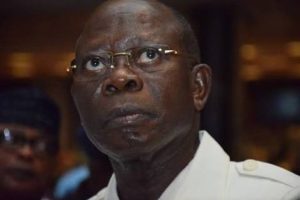 Primate Elijah Ayodele, the leader of INRI Evangelical spiritual church, has revealed that he prophesied the suspension of Comrade Adams Oshiomhole as the National Chairman of the All Progressives Congress (APC).

Naija News reports that the Appeal Court had on Tuesday upheld the judgment of an Abuja High Court suspending Adams Oshiomhole as the national chairman of the APC.

Governor Godwin Obaseki had earlier resigned his membership from the APC after meeting with President Muhammadu Buhari.

In a statement to newsmen, Primate Ayodele said: “This also happened on the day Oshiomhole’s newfound enemy, Godwin Obaseki left the All Progressive Congress due to obstinate decision of the national chairman to ease him out of the primary election of the party in Edo state, set to take place on June 22.”

Recall that in his previous prophecy, Primate Ayodele had warned Oshiomhole against fighting Obaseki who has been chosen by God to govern Edo State.

He warned that if Oshiomhole isn’t careful, he will not see 2023 as the national chairman of the party

‘’If Ize Iyamu wins, Edo state will be worse than it is presently, he is not ordained to be governor but wants to be forced on the people of Edo state. If they mistakenly put Ize iyamu, he should know that this isn’t church, something will come around. If Oshiomhole isn’t careful, he will not see 2023 as the national chairman of APC,” he had said.