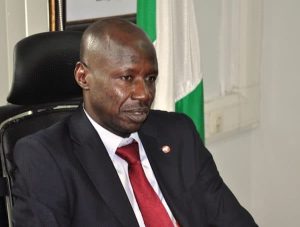 The Presidential Committee on Audit of Recovered Assets (PCARA) has accused the suspended acting chairman of the Economic and Financial Crimes Commission (EFCC), Ibrahim Magu of failing to account for 332 out of the 836 real estate property recovered.

The committee further accused Magu of re-looting the recovered loots and using the unaccounted proceeds/property to illegally enrich himself and his associates.

According to the presidential investigative committee, some of these assets have been sold at give-away prices to Magu’s associates while others have been taken over by some top EFCC officials without following due process.

“Most of the recovered assets are allegedly sold without anyone knowing and without proper records and without recourse to the Federal Ministry of Works and Housing that has the mandate to undertake evaluation of such property,” the report read as reported by NAN.

“Some of the assets have been taken over by EFCC officials while some are sold at giveaway prices to friends and cronies of the Acting Chairman.

“It is also on record that the (suspended) acting chairman is maintaining different accounts, including using proxies who return the benefit of the sold assets to him.

“These funds are then used to procure property and lands in the names of some of his proxies.”

Apart from the landed properties and bank accounts, some other assets including cars have been left fallow for over 15 years, the report noted and has constituted economic wastage.

“A disturbing example is the two vessels that allegedly sunk at NNS Beecroft Naval BASE, Lagos and NNS Pathfinder Naval Base in Port Harcourt without trace under the watch of the acting Chairman of EFCC,” read the report.

“The vessels named MT GOOD SUCCESS, MV PSV DERBY and MV THAMES were allowed to sink in spite of several warnings from the Navy on the need to evacuate the petroleum products in the vessels.

“The total value of the assets lost due to the negligence runs into millions of US dollars. The (suspended) acting Chairman is yet to provide a report on what happened to these vessels.”

The committee report added that the EFCC made conflicting submissions or returns to it in respect of the non-cash assets which substantially affected the committee’s assignment.

“For instance, EFCC stated 836 as the number of Recovered Real Estate in the Original Returns it made to the President on 07/04/2017,” the report read.

“It is interesting to note that when the Acting Chairman was further queried on this lapse, he made further contradictory 2nd return of 504 on 09/03/2018 thereby bridging the gap to 332 property.’’

The committee, therefore, noted that the action is a clear sign that there is a deliberate attempt to hide the exact figures of recoveries, which is an indication of fraudulent intent.

It will be recalled that Magu is currently facing a presidential panel headed by Justice Ayo Salami over alleged cases of abuse of office, mismanagement of funds, and insubordination brought against him by the Attorney General and Minister of Justice of Nigeria, Abubakar Malami.