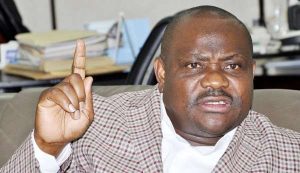 Governor Nyesom Wike of Rivers State has revealed that a man who was not in police uniform but was armed with AK 47 rifle blocked his convoy at Waterlines Junction, Port Harcourt.

Making the revelation when the new Rivers Commissioner of Police, Eboka Friday visited him in his office, Wike said the man trailed his convoy until his security details stopped him.

He however did not say whether the man was arrested or the action taken by his security aides against the suspect.

Wike said, “Yesterday (Thursday), I was going out for inspection. We saw one guy carrying Ak47, not on Police uniform. He was on mufti, blocking us from Waterlines Junction when we went to inspect the Rivers State Assembly’s quarters on-going project.

“We moved on to inspect the Speaker’s residence project, and the man was still following us. So,the security wondered what’s going on and stopped him.”

Speaking further, the Rivers Governor urged the new police commissioner to stay within his professional mandate to fight crime without fear or favour and shun politics.

He added that nobody should be above the law and if any criminal is arrested, such person should be charged to court not even a politician demands for such favour.

“Because if I support the person who is kidnapping, it may be my turn tomorrow, I won’t always be Governor.

“So, whatever you can do with your team, please I beg you in the name of God, provide security. Don’t come here and play politics.”.

He commended the CP for reorganising the C4I unit of the State Police Command and pledged to support the team to succeed in their task to combat crime.

Wike observed that the level of kidnapping in the State has increased because the immediate past CP abandoned his duty and was hobnobbing with non-state recognised Chiefs.