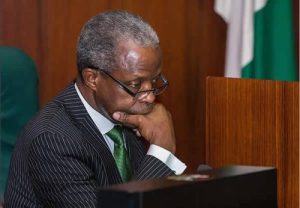 The Managing Director, Nigerian Ports Authority (NPA), Hadiza Bala Usman has accused some government agencies of disobeying a directive from Vice President Yemi Osinbajo which should have made work faster and easier.

According to the NPA boss, some agencies refused to obey the executive order signed by Prof Osinbajo on ensuring 24-hour port operations and synergy among such agencies.

She recalled that Osinbajo had given the directive in 2017 when he was the acting president of Nigeria.

Usman however lamented that some government agencies affected by the directive, intentionally disobeyed and are still disobeying the directive but nothing has been done to them in the form of sanctions or punishment.

She made her claims on Thursday while speaking during an interview on Channels Television’s ‘Sunrise Daily’ programme.

In her words, “If you recall there is an executive order that was signed by the Vice-President which directed all agencies of government to conduct inspection (of containers) in one location and that executive order was signed in 2017.

“Certain agencies of government have not complied and one of the things we have said is sanctioning for non-compliance of an executive order that was released cannot be done by the Nigerian ports.

She added that she has taken necessary steps by reporting the matter to the Presidential Council on Ease of Doing Business chaired by Professor Osinbajo but nothing has been done to the erring agencies.

Usman lamented that it is bad enough for the agencies to have disobeyed the order but the failure of the presidency to address the non-compliance of the affected agencies is also an issue of concern.

She said: “There is an executive order to that extent. Some agencies have not complied. There have been several explanations and justifications for the non-compliance by these agencies. The NPA has raised it to the Presidential Council on Ease of Doing Business chaired by the VP to ensure sanctioning for non-compliance and as I keep saying, if a directive is given and agencies don’t comply, if there are no consequences for action and inaction that means I have not performed.

“We drew the attention to the Presidential Council on the Ease of Doing Business to ensure those agencies also participate in the 24-hour ports and that non-compliance has to be done by the Presidency arising from the executive order.”

Meanwhile, Governor Abubakar Sani Bello of Niger State has revealed that the federal government had abandoned the state government to its fate to rescue students and staff of Government Science College, Kagara.

The governor said this on Thursday while playing host to former Abia State Governor and Chief Whip of the Senate, Senator Orji Uzor Kalu who paid him a sympathy visit at the Government House, Minna.

Bello said that the federal government had left the state to shoulder all the financial responsibilities which the current spate of insecurity in the state has caused.