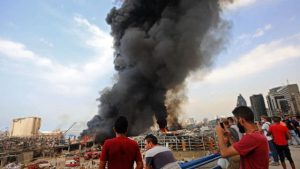 A huge fire has allegedly broken out at Lebanese major sea port on Thursday 10th of September, 2020.

Naija News learnt that the fire broke out at a Beirut port as Video footage shows thick plumes of smoke and flames coming from the wreckage in the Lebanese capital’s port area on Thursday.

A Lebanese military source said the fire broke out in a warehouse storing tyres and oil. However, the cause of the blaze is not yet known.

This is allegedly a video of the fire shared with me by a friend. pic.twitter.com/YYYTHDW3yQ

Television footage showed firefighters trying to douse the blaze in an area surrounded by the mangled remains of warehouses that were destroyed in the explosion last month.Local TV stations said the companies that have offices near the port have asked their employees to leave the area.

Lebanese troops closed the major road that passes near the port referring traffic to other areas.