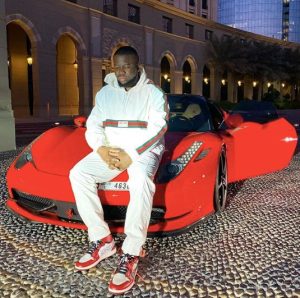 A Nigerian journalist, Kemi Olunloyo, who made this claim in a post on the micro-blogging site, Twitter, quoted a source at the Federal Bureau of Investigation (FBI), the domestic intelligence and security service of the United States and its principal federal law enforcement agency, to have confirmed Hushpuppi’s Coronavirus status.

#COVID19 is real. You never know where you’ll catch it. Stay home stay safe and don’t be a person that will be uprooted from your home for alleged fraud. HushPuppi will now have to be isolated in solitary. Hope he does not commit suicide. Good luck to him.”

#BREAKING #Kemitalksinfo A source @FBILosAngeles told me Ramoni Olorunwa Abass reportedly tested #Covid19 +ve asymptomatic. Remember that it CAN’T be announced on US soil due to the HIPAA law. He is locked up at MCC Chicago, a #COVID19 ravaged federal prison

Meanwhile, this is coming after Dubai Police authorities released a video of how Hushpuppi and Olalekan Jacob Ponle popularly known as Mr Woodbery were arrested for fraud. The Dubai based Nigerian big boy was arrested for an alleged $35 million by Interpol and the Federal Bureau of Investigation (FBI).