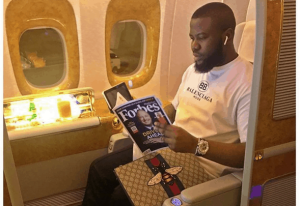 This followed the withdrawal of Gal Pissetzky and Vicki Podberesky, his former attorneys.

Naija News recalls that the lawyers announced their decision after months of negotiations with the U.S. government, court documents obtained by PremiumTimes showed.

He said the lack of communication has created a breakdown in the attorney-client relationship to the point where he believed that Mr Abbas deliberately chose to stop talking to them.

However, on January 21, Mr Pissetzky said he received a telephone call from Mr Abbas, informing him of the decision to retain a new counsel.

Hushpuppi has now hired Mr Loius Shapiro, who was once a deputy public defender in Los Angeles County.

He is also considered as one of the top criminal defence attorneys in Los Angeles as he regularly trains new attorneys in the “most effective approaches and methods to handling criminal law matters.”

Mr Shapiro, a certified criminal law specialist by the State Bar of California, serves as a Criminal Justice Act Federal Trial Panel attorney for the Central District of California.

The panel is a group of qualified and court-approved attorneys who are eligible for appointment by the Court to represent individuals in criminal cases who are unable for financial reasons to retain counsel.

Recall that Hushpuppi was arrested alongside Olalekan Jacob Ponle also known as Woodberry in the United Arab Emirate on June 10 2020 for multiple fraud charges after a raid by operatives of the Dubai crime unit.

The Dubai Police authorities had released a video of how Hushpuppi and Woodberry were arrested for fraud. The Dubai based Nigerian big boys were arrested for an alleged $35 million by Interpol and the Federal Bureau of Investigation (FBI).

The duo were then extradited to Chicago, the United States on July 2, 2020.