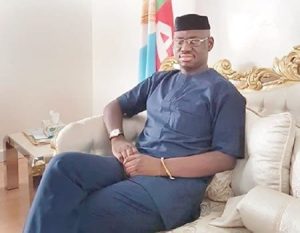 The political activist noted that APC called for the investigation of the PDP leaders after the arrest of Ramon Abbas popularly known as Hushpuppi because it wants the downfall of the opposition leaders.

Recall that Hushpuppi was recently arrested by the Dubai police and extradited to the United States where he is currently facing trial.

Frank in a statement released on Tuesday noted that the ruling party is calling for the investigation of the politicians due to the pictures with Hushpuppi posted at a public function.

The former deputy spokesperson of APC further stated that photographs do not prove any of them had business dealings with Hushpuppi who has been arrested for fraud.

He added that Hushpupi, like any other Nigerian, asked for photos with the PDP stalwarts, and they obliged.

Frank said it was beyond the comprehension of the APC, “because Nigerians loathe them and run away from them whenever they come across them in foreign countries, hence they are trying to rope us into imaginary business dealings with Hushpuppi.”

Frank stressed that America is not Nigeria “where APC militant wing, alias the Economic and Financial Crimes Commission (EFCC) and other security agencies, go about harassing innocent citizens even before any investigation is carried out”.

Frank mocked “the cabals in the Villa”, noting that before 2015, “they were in debt and extreme poverty but have within the last five years of Buhari’s regime become multi-billionaires”.

He noted “acquired Etisalat, now known as 9Mobile, Keystone Bank, etc. Some of these APC political hushpuppies even had bullion vans in their houses during the 2019 presidential election campaigns.”

Frank recalled how a governor under the party “opened a bank in his ‘Babariga’ where he openly pocketed huge amounts of dollars without personal shame or repercussions from this government”.

“The Attorney-General of the Federation and Minister of Justice, last week, called for the sack of the head of the EFCC over corruption allegations. The EFCC boss, Ibrahim Magu, is presently being quizzed by a Presidential Panel. What can be more embarrassing to a country than for the head of its anti-graft crusade to be indicted for corruption?”

Frank advised the government to “bury their head in shame. This is the most corrupt democratic administration in the history of our beloved country. If Hushpuppi had been extradited to Nigeria, this corrupt and clueless Buhari-led APC regime would have set him free.”

He noted that the FBI does not need a petition before it decides to investigate an individual. He called on the President Buhari administration to stop sponsoring unnecessary protests.

He urged them to focus on delivering, “the fake promises they made to Nigerians during their electioneering campaigns and to think of how to repay all the debts they have accumulated through incessant foreign and local loans”.