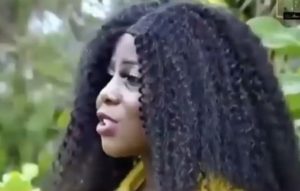 In a dramatic expression of event, a lady by the name Faith has revealed that she is the daughter of Nigeria’s former President, Chief Olusegun Obasanjo.

According to a video posted on the twitter handle of popular media personality, Kayode Ogundamisi, Faith said that she is the ‘side daughter’ of Olusegun Obasanjo, the former president.

Speaking further, in the undated video, the lady claimed she had spent all her life in Madrid, Spain, but decided to return to Nigeria on the occasion of her birthday.

You only hear of side chicks these days and you forget that ‘side chicks’ produce side children — side daughters and side sons. So, I am Obasanjo’s side daughter, a dual indigene of Abeokuta and Benue state. Don’t ever call anybody a bastard.

“Not at all, because we are all produced by a man. I am a product of the job my father did in Benue state, like the end result of it. I have been silent all these years, but I am 21 years old now.”

The lady appreciated the former president for giving her money to start up a business, revealing she has made huge fortunes from it.

“My dad and I have our issues, you know father and daughter issues. But I want him to know one thing. The money he gave to me is fruitful, of course, it is. I really made use of it. I am now the CEO of Big Mam Naija (BMN) Reality TV. I also have my company, Green East Global Resort and Hotel which I bought for $1 million. Don’t forget, never call anyone a bastard,” she explained.

Here Is the video below on Kayode’s Twitter handle

Faith Olusegun Obasanjo tok say she be side daughter. pic.twitter.com/lQINS4CqcN