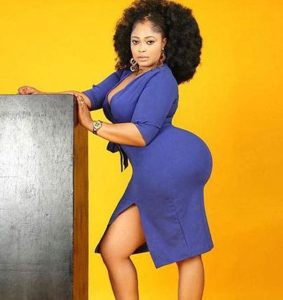 Nollywood star actress, Biodun Okeowo also known as Omoborty has revealed her position on the trending DNA test among couples.

She noted that if both parties can agree on getting the test done, it’s not a big deal.

The actress while expressing her personal view on the matter during an interview said she would allow her husband to do the DNA tests for their children just to prove she has nothing to hide.

Omoborty however added that the husband must be ready to give a satisfactory explanation on why he needed to carry out the DNA test as that will determine the basis of the trust in the relationship going forward.

”If both parties are cool with it. Yes, it’s okay to go for a DNA test. Because there could even be foul play in the hospital (laughs), I heard some hospitals swap child sexes. I don’t know if it’s true oh or I’ve watched too many Nigerian movies.

But to be candid. It’s not a bad idea if there’s a need to clear a doubt or something.”

“However, if my husband asks that our kids go for a DNA test, I won’t blame him, though. Yes, I’ll allow him. Not allowing him means I’ve got a skeleton in my cupboard. But he just proved to me that he didn’t trust me.
I will oblige him, but my actions after that depend on his explanation and what led him to request such,” she said in an interview with the Sun.

The divorced mother of two also added that her previous relationship has taught her so much about men and dating, noting that she can’t dictate to fellow ladies on the kind of man to date, each lady is free to do whatever rocks her boat she noted.

Okeowo added that she is still very much open to getting married.

“I’ve dated the rich, the average, and the poor, yes I have!”

“Love strikes most in odd places. And for me it’s love first before any other thing… yes some women might be lucky getting their package full this means (having a handsome, rich man) Which is every woman’s desire and prayer.”

“But then someone must be with the other men too. And we shouldn’t forget that God could come through for anyone, especially when the person is not lazy and has prospects,” she submitted.

Meanwhile, Nollywood star actress, Iyabo Ojo has confirmed that she actually did surgery on her stomach to have a flat tummy.

The 43-year-old mother of two while explaining her reason for the tummy surgery said she needed to get rid of the extra skin that usually comes after childbirth, and look good for herself.