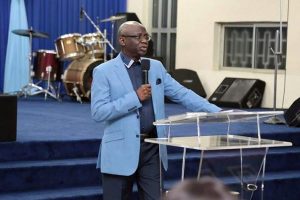 Pastor Tunde Bakare, the General Overseer of the Citadel Global Community Church formerly known as Latter Rain Assembly, has revealed why he has refused to join the current protests against fuel and electricity price hike and other issues in Nigeria.

He also warned those organizing the protests to stop trying to drag him into their activities.

The fiery Lagos-based preacher said it is not compulsory to speak about every national issue and charged those who want to protest to do so without involving him.

Bakare, the 2011 Vice Presidential candidate to now President Muhammadu Buhari added that he took part in a 2012 demonstration against fuel price hikes because he was asked to do so by God.

He added that his protests then was against the oppression of the masses and not just against fuel price hike.

“I did not campaign against subsidy,” Mr. Bakare said at a virtual conference organized by Poju Oyemade to commemorate Nigeria’s Independence Day. “I campaigned against oppression of the masses.”

“Is it written anywhere that when there are issues in Nigeria Bakare must protest? Those saying where is #SaveNigeria group, start your own,” he added.

Some social media commentators had been asking questions on why Pastor Bakare has remained silent in the face of outcries and protests against the Buhari administration.

Most recently, man protesters took to the streets on October 1, Nigeria’s independence day to protest against increasing insecurity, economic hardship, increase in petrol pump price and hike in electricity tariff.

Some of the protesters were arrested by security operatives while a photojournalist with a major newspaper in the country identified as Olukayode Jaiyeola, was allegedly brutalised and wounded in the head by operatives of the Lagos State Command of the Nigeria Police Force.