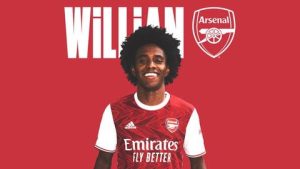 Arsenal new signing, Willian has noted that the major reason why he joined the Gunners is to win the UEFA champions league with the club manager, Mikel Arteta, in the next three years.

The Brazilian while speaking with The Sun confirmed the target for himself and the North London side, whom he joined on a free transfer after leaving Chelsea.

Arteta led the Gunners to an FA Cup triumph last season but the club finished eighth in the Premier League, 10 points off the Champions League qualification places.

Willian believes the club will not only be back in European football but will be successful in it.

“One of the reasons I wanted a three-year deal was to be part of a plan, not just a player passing through,” he said.

“When I talked with the manager he told me why he needed me for three years.”

“It was that he first wanted to qualify for the Champions League and win it by the time I left. That was what I wanted to hear.”

“I was at Chelsea for seven years and won everything except the Champions League. Hopefully this move will give me the trophy I haven’t got as well as another Premier League title.”