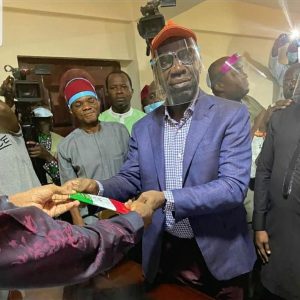 Naija News reported that the Governor formally joined the Peoples Democratic Party (PDP) after his recent resignation from the All Progressives Congress (APC), Nigeria’s ruling party.

Speaking during defection speech and collection of his PDP membership card, Obaseki said after consultation from his people across the state, he decided to become a Member of PDP. He also said that joined PDP to advance his ambition to seek re-election as Governor of Edo State.

He, however, reinstated his commitment to engendering good governance and sustainable development of  Edo State.

I have officially joined the @OfficialPDPNig to advance my ambition to seek re-election as Governor of Edo State.

I, as always, remain committed to engendering good governance and sustainable development of our dear state.

Meanwhile in another development In Edo State