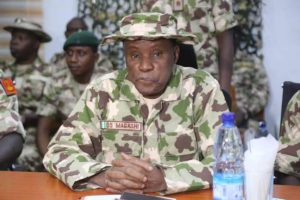 The Minister of Defence, Bashir Magashi, on Thursday, defended his statement calling on Nigerians to stop acting like cowards and fight against bandits.

The Minister while speaking on the abduction of students and staffs of the Government Science College, Kagara, Niger State said every Nigerian have a responsibility to ensure there is the security of lives and properties in their community.

He had said: “At times, the bandits will only come with about three rounds of ammunition, when they fire shots everybody runs. In our younger days, we stand to fight any aggression coming for us.”

“I don’t know why people are running from minor things like that. They should stand and let these people know that even the villagers have the competency and capability to defend themselves.”

The statement, however, did not go down well with Nigerians who accused him of being insensitive to the plights of citizens amid rising insecurity in the country.

Magashi while speaking on Thursday said he didn’t ask Nigerians to kill one another, but that those who are being attacked should learn to make sacrifices and resist running and protect themselves in the little way they can.

“I didn’t say they should go and kill themselves, but they should watch and see what will happen before they take the step of abandoning their house simply because somebody has made a shot or two. That’s what I was trying to say, I didn’t say Nigerians should defend themselves.”

“I only said that every attack should not be seen as ‘if I don’t run away there’s nothing else I can do’. There are so many ways you can defend yourself, you can hide and watch what he is doing and as soon as he exhausts his strength, then you can run over him that’s what I mean.”

Speaking further, he advised Nigerians to be more courageous and “If there are one or two people shooting in the air just to scare them, steal their things or kidnap some people”.

According to him, the villagers can resist attacks by understanding simple techniques of protecting themselves.

“How many houses can they enter before they finish their ammunition?” Magashi quipped.

Asked how those attacked can defend themselves against bandits, the minister reiterated that they should not exhibit cowardice and “see the first attempt as a wakeup call, find yourself in a good position, if they want to overrun you, then you run away.”

He said: “There is no need to allow small people on two motorcycles to come and destroy a whole village, that’s what I mean and they should know that the people there will resist them. If they (bandits) know that they can be resisted, then they probably can need more firepower to come there, before they have that power, the military or police should have that information which they will come and protect them in more strength and commitment that’s what I mean (sic).”

On if Nigerians should bear arms, the minister maintained that the time is not auspicious enough as the Nigerian government needs to be more prepared.

“I don’t think it is an appropriate time for Nigerians to be armed. I think we need more time to think about it, more enlightenment. The country should be well prepared to understand the sacrifices that one does, everyone should know their limitations, there are law and order and there is respect for human rights. If all these are achieved, probably we can allow some people to hold arms.”