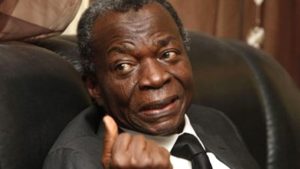 Former President of the Appeal Court, Justice Ayo Salami has stated that he regrets heading the Presidential panel set up to investigate Ibrahim Magu as the Chairman of the Economic and Financial Crimes Commission.

The statement was confirmed by two lawyers of the embattled EFCC boss during an interview with Premium Times.

According to the lawyers, Salami allegedly stated this on at the close of Mr Magu’s defence hearing held at the Presidential Villa in Abuja.

The presidential panel has been investigating allegations of corruption and insubordination following a petition filed by the attorney general of the federation, Abubakar Malami.

Two lawyers to Mr Magu who were at Friday’s sitting, Tosin Ojaoma and Zainab Abiola, while speaking during the interview before the commencement of the proceedings, said Salami told them that he regrets accepting the task to chair the panel.

“We all sat down as lawyers, after a little period, Justice salami said he regretted working in this panel.”

“As soon as the proceedings opened, Salami was full of regrets, he (Salami) brought out his handkerchief and said he is full of regret taking up the job. Then our team asked him, is it because the panel is yet to find evidence against our client, (Magu), Mr Salami did not respond he only kept saying he regrets taking up the job,” Mrs Abiola said.

“Mr Salami kept saying he feels embarrassed for talking up the job. He also lamented that for years after he had retired he was seated in his home eating Tuwo (a popular food from the northern part of Nigeria),” Mr Ojaoma