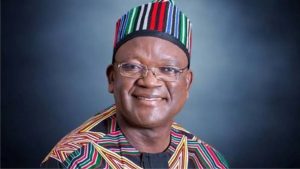 Governor Samuel Ortom of Benue State, on Friday insisted that he stands on his suggestion that well-meaning Nigerians should have access to gun in order to curb insecurity in the country.

Recall that the Benue State Governor called for an upgrade in gun licenses across the country due to insecurity issues in the country.

Ortom while speaking newsmen in Abuja insisted that his suggestion was harmless and that those trying to twist his comment, and alleging that he was calling for anarchy should rather question herdsmen and bandits who carry arms across the country.

“My call was out of passion.”

“I’m asking for an upgrade of the existing policy of gun licensing.”

“Terrorists will caution themselves when they see that people are armed against them.”

“We must as Nigerians find ways to stop these people.”

”When the Fulani Jihadists came, they said they came to take over Nigeria. They came with an agenda. They came to impose religion, but people should be allowed to practice their religion in this country.”

“There is an agenda and it’s being executed.”

”The Fulanis destroying the country are not Nigerians. It’s impossible for them to take over our country.”

“As for us in Benue, we have arrested over 400 herdsmen, convicted 130 herdsmen and confiscated many cows.”

“I’m happy the IG said these herdsmen are not Nigerians. I knew it. They have an agenda. Only Nigerians have the responsibility to make things right.”

“How can my suggestion be a call for anarchy?”

“This is a suggestion that the Federal Government should take seriously.”