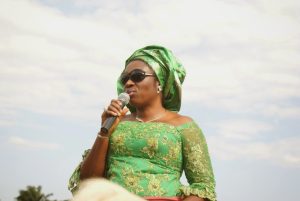 Mrs Uche Ekwunife, the Senator representing Anambra Central Senatorial District, has noted that she will become the next governor of the state if the Peoples Democratic Party gives her the mandate to run.

The Governorship election in the state is expected to be fixed by the Independent National Electoral Commission for November 2021.

Ekwunife while speaking with the party ward chairmen in Akwa, the state capital, noted that she has the capacity to defeat the candidates of all the political parties in the race.

She said, “Let us do what will take us to the government house and I’m presenting myself to seek the Number One position in the state and I will take PDP to the Agu Awka Government House because I know that I have the capacity and capability to win the election for PDP.

“Once I have your ticket, I have won the election for you. If you want government house, Iyom( Ekwunife) will give you government house and if I have the PDP ticket, let all the political parties in Anambra state present one candidate, I will defeat all of them. I don’t think I have any challenge winning the election.”