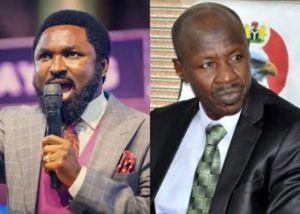 Emmanuel Omale, founder of the Divine Hand of God Prophetic Ministry, Abuja, has noted that he will not deny Ibrahim Magu, suspended acting chairman of the Economic and Financial Crimes Commission (EFCC).

This is said while giving a sermon to his congregation, noting that he is a prophet sent to everyone and not just Christians.

The embattled EFCC’s chairman, Magu is being investigated for allegedly mismanaging loot recovered by the anti-graft agency.

Shortly after his arrests, the Presidential Committee on Audit of Recovered Assets (PCARA) said Magupurchased a property in Dubai using Omale’s name.

Reacting in the sermon However, Omale said he does not launder money for anyone and described the allegation “as a lie from the pit of hell”.

The pastor said Magu is not the only Muslim who have come to his church and got “results”.

“You see what is going on, on social media. Listen, I don’t launder money for anybody, it is a lie from the pit of hell, I have sons all over the world and I pray for them. They call me for advice, for counselling and I pray for them and beyond,” Omale said.

He added that the altar is for everyone; the Muslims, pagans, Christians etc.

He saidIbrahim Magu is not the only Muslim who comes, sleep, talk to God and they have result.

“I’m not surprised, Jesus went through this, Jesus was persecuted, if Jesus was not persecuted they won’t hear his name. People that don’t know Omale, know Omale now. If I want to do this kind of publicity, the money is much all over the world, promotion. People that dont want to hear about pastor before, as they heard ‘pastor launder money’, they will go to my YouTube page and they will see the power of God there and they will become my son again.

He said there is no one who would watch his YouTube page and not follow him by force.

“My face was everywhere – publicity. No doubt about it, I can’t deny him like the way i cannot deny all of you.”

The pastor said anyone fighting him is fighting Jesus.