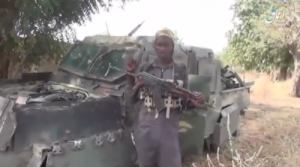 The suicide bomber who rammed an explosives-laden truck in a military convoy during a clash in Yobe State has been identified as Abdullah Al-Ansari.

Naija News had earlier reported that Boko Haram terrorist on Monday killed Nigerian soldiers with an explosives-laden vehicle which rammed into them during a clash in Yobe State.

A military source that spoke with SaharaReporters noted that the bomber believed to be a member of the Islamic State West Africa Province (ISWAP) faction of the group, attacked the military convoy in Goniri, a border community between Yobe and Borno states.

It was also disclosed that the terrorist group also engaged the Nigerian troops in a shootout.

The military source said, “There was an SVBIED (Suicide Vehicle Borne Improvised Explosive Device) attack at Goniri yesterday, so many soldiers were killed and injured. The number of casualties is currently unknown.”

In another development, an American pastor identified as Abu Zacharia has offered to replace Leah Sharibu in the den of Boko Haram.

Recall that the terrorist in 2018, stormed the Government Girls’ Science and Technical College, Dapchi, Yobe State and abducted 110 schoolgirls.

The abduction led to the death of five people, while the terrorist group released 104 of the schoolgirls and held on to Leah who refused to denounce her Christian faith.

Leah has been in captivity since then.