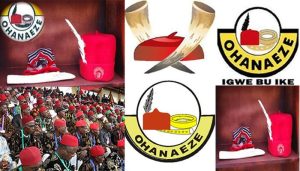 The leadership of Ohanaeze Ndigbo Youth Council Worldwide says the exchange of threats and counter-threats between Ohanaeze Ndigbo and Indigenous People of Biafra (IPOB), is a sign that Igbo leadership are no longer in charge of affairs of Igboland.

In the statement, the group rendered an unreserved apology to all Biafra agitators who may have been slighted by the recent spat between the parent body of the Igbo-socio-cultural and IPOB leadership.

The leadership of Ohanaeze Ndigbo Youth Council Worldwide said the current Ohanaeze leaders have derailed from the original concepts and ideologies of the founding fathers.

The statement said: “OYC will always be courageous and bold to speak the truth at all times, In Igboland today, it’s regrettable that Ohanaeze Ndigbo had lost relevance to IPOB as Igbos no longer have confidence in deceptive rhetoric Of Ogbonnia John Nwodo.

“It was Ohanaeze Ndigbo under Nwodo that sold the conspiracy theory to Igbo political leaders to proscribe activities of IPOB in 2017 to downplay the rising profiles and rivalry of Biafra agitators in taking over leadership from Ohanaeze Ndigbo and Governors were only pawns in the script drafted by Igbo leadership.

“Igbo youths insist that the constant economic threats and woes of Igbo businessmen face in Southwest Since 2015 as regards to collapse of their businesses through market demolitions and relocations are the direct consequences of regrettable Ohanaeze political decisions done in error without foresight and futuristic ideas on how it will affect Igbos who are largely businessmen.

“The ongoing restructuring exercise in Ohanaeze Ndigbo is aimed at restoring the dignity and integrity of Igbo leadership back to the original status quo as Apex Igbo Socio-Cultural Organisation not, socio-political.

“The crisis in Ohanaeze Ndigbo is a signal that there’s constant pressure to reunite Igbos to speak with one voice.

“We, therefore, tender unreserved apologies to all Biafra agitators all over the world and urge them to help Igbo youths get rid of bad eggs especially few circle of elders that had clandestinely destroyed the reputation of Ohanaeze Ndigbo because selfishness and fortune-seeking, these circle of elders are plotting to mortgage the collective interests of igbos by imposing a new leadership of Ohanaeze Ndigbo by 2021.

“They must be resisted and flush out of the system.”