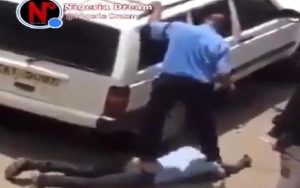 The Inspector-General of the Nigeria Police Force (NPF), Mohammed Adamu, says a trending video where a man dressed as a policeman is seen stamping on the neck of a civilian was not captured in Nigeria.

Naija News reports that IGP Adamu made this clarification in a statement issued by Force Public Relations Officer, DCP Frank Mba, on Monday, in reaction to a video credited to @NigeriaDream, where policeman, dressed in a blue shirt and black trousers, was seen standing on the back of the civilian lying on his stomach on the road with one leg pressing down his neck.

IGP Adamu said in the statement that: “The attention of the Nigeria Police Force has been drawn to a viral video credited to “@NigeriaDream”, showing a security officer meting out inhuman treatment to a man in clear violation of his rights, dignity and freedom.

“In the video, the security officer was seen stamping his feet on the neck and head of a man lying helplessly on the floor. The Force condemns the act.

“It has however painstakingly fact-checked and examined the video and hereby states that the incident did not take place anywhere or at any time in Nigeria.

“A critical look at the video indicates that – the vehicles on the scene are neither common vehicles used in Nigeria nor are the number plates of Nigerian pattern; Although the man in uniform looks like a private security guard that can be found anywhere, he is certainly not a personnel of the Nigeria Police Force. Also, the background language in the video is not any of the known Nigerian languages.

“Meanwhile, the Inspector General of Police, IGP M.A Adamu, NPM, mni calls on citizens to discountenance the video as a clear mischief ostensibly orchestrated to stir up ill-feelings towards security agencies in Nigeria. He assures of the commitment of the Nigeria Police Force to always respect and uphold the rights of the citizenry.”