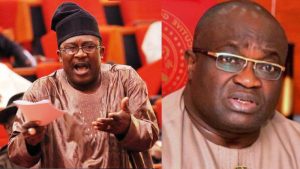 Governor Okezie Ikpeazu of Abia State has berated Senator Smart Adeyemi (APC-Kogi West) for his statement on the floor of the Senate on Tuesday.

While contributing to a debate at the Senate on Tuesday, Adeyemi steered reaction in the senate over his comment describing Governor Ikpeazu as a “champagne drinking man”.

The governor’s aide said Ikpeazu “does not take alcoholic drinks and he is shocked” by the development.

Ememanka said the senator is suffering from a ”protracted case of mental illness”.

He said ”the urge to ignore the senator became irresistible judging from the total disconnect between the matter being discussed by the Senate and the comments made by the senator as they affect the governor”.

“If Senator Adeyemi was of sound mind, he should have known that when it comes to education, Abia is miles ahead of his home state of Kogi. Indeed, not just in education but in every single area of development,” Ememanka said.

“Under the watch of Governor Okezie Ikpeazu, Abia State has maintained first position in WAEC Examinations in the entire country for five years now. Kogi has not come close to the first 20. Never!

“Just last week, the National Bureau of Statistics adjudged Abia state as No. 3 on the list of States that attracted foreign direct investments, with only Lagos and Abuja ahead of Abia state in the entire country.

“It takes much more than drinking champagne to guide a state from zero foreign investments to No. 3 in the country. Kogi state featured prominently on the list of states that attracted zero investments. It is only a state that is peaceful and secure that has the capacity to attract such cross border investments.”

The Abia governor’s aide stated that since the inception of Ikpeazu’s administration there has not been any case of an attack on any school.

“While his state is still awarding contracts for the renovation of schools, Abia had long completed more than 500 classroom projects scattered across schools in Abia State, and still counting,” he said.

“Senator Adeyemi was never heard to have either responded to that statement by the NCDC or raise it on the floor of the senate,” he said.

“Yet, he has the effrontery to abuse a governor whose state has maintained one of the lowest COVID-19 fatality rates in the country through proactive measures to protect our people.

“Between a governor who has consistently denied the existence of COVID and the one who has put in place measures to protect his people, one wonders who is the drunkard.”