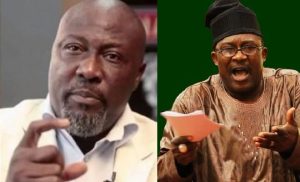 A former Kogi West Senator, Dino Melaye has lambasted his successor in the Senate, Smart Adeyemi over his comments on Governor Okezie Ikpeazu of Abia State.

While contributing to a debate at the Senate on Tuesday, Adeyemi steered reaction in the senate over his comment describing Governor Ikpeazu as a “champagne drinking man”.

Reacting in a post on his Twitter page on Tuesday, Dino Melaye described Senator Adeyemi’s son as a ‘known drug addict.’

He wrote: “It is shocking that a diabolical father of a known drug addict who even went to a rehabilitation centre will call the decent Governor of Abia State names. I apologise on behalf of this blood-thirsty senator.”