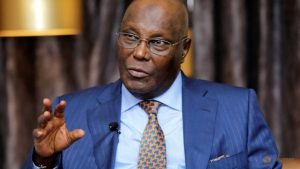 He also urged Nigerians to put aside ethnic, religious, and all other forms of differences tending to pull the country apart and work towards a collective purpose.

Atiku who praised the resilience and doggedness of the Nigerian youth called on the government to harness their potential and invest in them so they can turn the potential to passion and excellence that will result in a better country for everyone.

The former Vice President made the call in a statement on Wednesday, 30th September which he released in commemoration of the October 1st 60th independence anniversary of the nation.

He wrote: “On Saturday, 26 September, 2020 in far away United States, Israel Adesanya, an illustrious Nigerian, who embodies the indefatigable Nigerian spirit made the nation proud by successfully defending his UFC middleweight title.

That victory lifted our spirit, and gave us hope in a season of hopelessness when every index of life and human development in our country is trending abysmally negative.

Nigerians of all hues are united in the celebration of the victory of Adesanya. It is our victory. No one cares if he is from Abia or Zamfara, Rivers or Osun state. Indeed some are wont to adopt Ibrahim or Omesonma as his name. But what is important is that he is a Nigerian, and his victory our collective victory.

Truth be told, there are many Adesanyas in every nook and cranny of our land. They give meaning to our aspirations. Sadly we have failed them. The structure on which we have hinged our political and economic emancipation has equally failed us. We do not hope to continue doing the same thing with jaded and unworkable system and expect to get a remarkable result.

We may have missed countless opportunities to reset our mindset moving forward as prosperous people, but this 60th anniversary of the life of our nation offers introspection.

The youths of Nigeria represent the future wealth of the fatherland and the only way we can tap into them is through quality investments in education and skills acquisition.

Through the creativity that they inject in their passion, the excellence of the Nigerian youth is a global signature in diverse fields notably in sports, as they can be found in medicine, in education, in business and finance, agriculture, and in our entertainment industry. Indeed they ‘berekete’ in every facet of our life from the rain forest of the south to the Sudan and Sahel Savannah of the North and the Guinea Savannah of the midlands of the territories we call home.

We may have failed to take advantage of the power of the Nigerian youth. But there is something much more significant that their triumphs teach us a people looking forward to a better future. When they win, they celebrate Nigeria. Our youth are ready and eager to conquer the world. What they lack is the leadership to take them through that process.”

Atiku further called on the government to put in place workable developmental plans, noting that the era of doing things the same way and expecting different results should be left behind.

“For Nigeria to work for the millions of its people, and to be reckoned with as a global competitive force in the nearest future, we must come up with a development plan that will have our youth at the centre of the plan. The times of idle, lame promises are over! We urgently need to build a new Nigeria where every dream would be embraced and the potentialities of our youth could be unleashed without the usual fears that have dragged us.”

“I also call on those who have taken up arms against Nigeria to have a rethink. Whatever differences they may have with the rest of Nigeria, whether religious, ethnic or political: terror, violence and separatism are not the way. Let us learn from history. In Ireland, Israel, and the Balkans, such groups have seen the wisdom in giving up armed struggle for participation in the political process.”

“There is much wisdom in the saying that to jaw jaw is better than to war war. We must accept the reality that we are all brothers and sisters sired by our fatherland.”

“We cannot defeat separatist groups by force of arms alone; we can only defeat separatism by making all Nigerians feel like they belong. And this is only possible when we live up to the words of our national motto: Unity and Faith, Peace and Progress.”

“As a nation, we asserted our independence in our infancy by lending to other nations. We must be careful not to lose the hard-won independence of our heroes’ past. By learning to live within our means, we can put a stop to the needless borrowings that threaten our economic independence.”

The former Vice President urged separatists to lay down their arms and also called for the release of all political prisoners as part of the healing process Nigeria needs.

“Our nation is in dire need of healing. We must foster unity and douse the tense atmosphere which is breeding feelings of alienation. We must promote freedom of speech and freedom after the speech.”

“As such, in the spirit of our 60th Independence Anniversary, I call on the Federal and state governments, to release all political prisoners and detainees, and discontinue the prosecution of such individuals. If Nelson Mandela could reconcile with those who imprisoned him for twenty seven years, we can reconcile with those who have disagreed with us.”