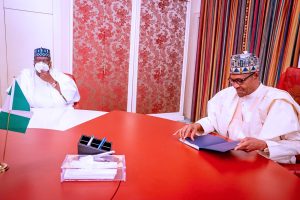 Briefing newsmen after the meeting between the two leaders, Lawan disclosed that the meeting focused majorly on the security challenges facing the nation and how to overcome them.

He added that between now and the next two months, Nigerians will notice some activities targeted at improving the current security situation in the country.

The Senate President also noted that it part of plans by the government to make the roads and farms safe before the rains come so farmers can plant and have a good harvest.

In his words, “There is nothing more important today or more topical than the security of Nigeria.

“We have discussed, we had a very extensive discussion on the security of all parts of Nigeria, and how we should go about improving the situation, we all have roles to play.

“Nobody would like to see the kind of thing that we are experiencing in various parts of the country in the form of insecurity.”

He added that government is not shying away from its responsibility of providing security for Nigerians despite the current challenges.

He added, “I believe that between now and probably the next two months, there will be a lot of activities to ensure that we secure environments for people to live a very normal life, where we also believe that the government is headed in the right direction.

“Recall that the National Economic Council approved taking some funds from the Excess Crude Accounts with a view to giving more resources to our armed forces.

“This is a commendable effort and we are ready to help with appropriation to ensure that we buy those things required for security.”

Lawan added that the continued unity of Nigeria is not negotiable and all stakeholders must work for it irrespective of political, social, ethnic, or other differences.

Apart from issues of insecurity, Lawan also disclosed that he and the president discussed the issue of the Niger Delta Development Commission (NDDC).

He disclosed that they both agreed that the NDDC has to be sanitized to be able to meet its mandate of developing the Niger Delta area.

He said, “We also had discussions on the need to ensure that government functions very well. So, we have few issues. These are housekeeping issues of getting the NDDC governing board’s nominations.

“I agree with Mr President that we have to complete the forensic audit to ensure that everything is done properly and the report is submitted to him. It is significant that whoever is found culpable should be treated as such.

“That will serve as a lesson and as a deterrent to others, because NDDC should have transformed the Niger Delta into a better environment than what it has been since the NDDC was created by a law of the National Assembly in 2000 or so.

“We are talking about almost two decades. That should have been sufficient time, given the resources that were deployed into the entity. So, we need to sanitize the NDDC and get the resources fully deployed in developing the Niger Delta.”

Meanwhile, the Senate has ordered the arrest of the sole administrator of the Niger Delta Development Commission (NDDC), Effiong Akwa.

Naija News reports that the Senate Committee on Ethics, Privileges, and Public Petitions ordered the Akwa’s arrest over the failure of the immediate past Interim Management Committee (IMC) to appear before it.

The panel is probing the alleged diversion of N6.25 billion meant for the purchase of COVID-19 relief items for the Niger Delta.