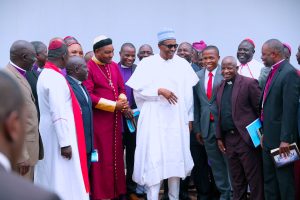 A coalition of Christians in the North under the auspices of the Arewa Christians and Indigenous Pastors Association has called on the United Nations to rescue Nigeria from a possible outbreak of war.

The Christian leaders at a press conference held in Jos on Thursday, February 25 said there is a need to address Nigeria’s current situation in order to prevent the nation from a full-blown war.

Speaking at the event, the Chairman of the association, Rev. Luke Shehu lamented over the injustice going on in the country and the government’s failure to appropriately respond to the disturbing situations.

“Following Nigeria’s slide into being a failed state and on the precipice of anarchy, absence of social justice, the rule of law, denial of minority rights and freedom of practice of religion as well as persecution coupled with the absence of institutions to check government abuse or to uphold the tenets of democracy, we kindly request that the United States Government through the appropriate process assign a special envoy to Nigeria with immediate effect to forestall a total breakdown of law and order leading to war,” the Christian leaders stated.

“Unless the Nigerian Muslims and politicians are telling Nigerians that the Constitution is inferior to the Sharia law, we must expunge the 1999 Constitution smuggled in by the fraudulent military government under retired General Abdulsalami Abubakar in 1999. He did a great disservice by being part of Nigeria’s problem today,” Shehu pointed.

Meanwhile, former Aviation Minister Femi Fani-Kayode has berated renowned Islamic scholar Sheikh Abubakar Ahmad Gumi for telling bandits that non-muslims are attacking them to cause chaos.
Speaking to bandits in a now-viral video online, the Islamic leader had claimed – without evidence – that the soldiers are stirring confusions with the aim of wreaking havoc.

Similarly, the Christian Association of Nigeria, on Thursday, said it was disheartening to see that states with highest Christian population in the North had faced severe persecution in the past six years.

The President of CAN, Dr Samuel Ayokunle, stated this during the breakfast meeting of the association held in Makurdi, the Benue State capital.

Ayokunle, who applauded the Benue State Governor, Samuel Ortom, for standing for social justice for all parts of the country, said, “Benue is among the most persecuted states in the last six years, just as states with large population of Christians especially in the North have faced the most severe persecution ever seen in the history of Nigeria.

“It is disheartening and most disappointing for some leaders to come out boldly to support the gross injustice being perpetrated. What type of audacity in supporting evil and illegality are we witnessing today?”