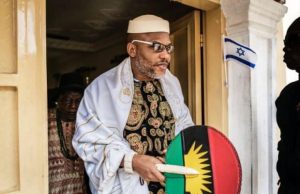 The Indigenous People of Biafra‘s Sit-At-Home directive on October 1, 2020, has failed in Imo with many residents going about their daily activities.

According to The Nation, markets, stores, artisans opened shops for business.

However, banks and government offices were closed, but residents were seen moving about freely while some were seen buying and selling food stuff in the markets and along the roads in the Owerri capital city.

Kanu, in a statement released through his spokesman, Emma Powerful said: “The sit at home order issued by the global movement on 1st of October 2020 is totally successful in so many states and cities in Biafraland.”

He said all states in South East and South South including Abia, Rivers, Ebonyi, Anambra, Imo, Delta states and other states in Biafraland complied with the order.

According to him: “There is empty market, roads, no vehicles on the road of Biafra and Biafrans all over the world are on the streets of their respective countries where they find themselves with our brethren from Oduduwa nation.”

“We thank our people in South Africa, USA, Canada, Britain, France, Japan, Germany, Indonesia, Australia and other countries of the world for their resoluteness declared to the world over that we are no longer interested in Nigeria. The whole world must understand that IPOB cannot go back to Nigeria.”