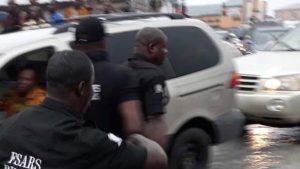 No fewer than twenty-two (22) members of the Indigenous People of Biafra, IPOB, has been arrested by the Rivers State Police Command for allegedly responsible for the death of an F-SARS officer at Oyigbo Local Government Area of the state.

Naija News had reported earlier that there was disarray in Oyigbo LGA, on Thursday, October 1 after some hoodlums reportedly attacked and killed a policeman in the community.

It was gathered that the IPOB members attacked the SARS officer on Wednesday night, the eve of their Independence Day sit-at-home order. Speaking on the development which has caused pandemonium in the Oyigbo community, a local source told newsmen that “passersby who saw the dead body of the police alerted the Oyigbo Divisional Police and in a combined effort of the officers attached to tactical units of Operation Sting and Anti-Cultis, the action of the rampaging hoodlums were curtailed as they later retreated to a neighbouring state after exchange of fire”.

On his part, while reacting to the incident, Police Public Relations Officer in the State, SP Nnamdi Omoni said, “Our SARS Office in Oyigbo was attacked.”

“We lost one of our personnel and our patrol vehicle burnt. We have arrested 22 suspects in connection with the incident. An investigation is ongoing,” Omoni noted.

“We have also stabilized the area and security beefed up”.

Meanwhile, Ekiti State Command of the Nigeria Police Force has alleged a plan by bandits to attack the state.