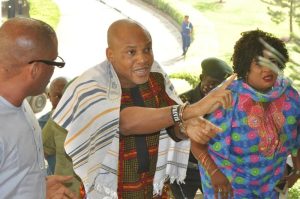 The leader of the proscribed Indigenous People of Biafra (IPOB), Mazi Nnamdi Kanu, has revealed why Fulani herdsmen have refused to graze their cattle in the north.

Naija News reports that Nigeria has been grappling with the effect of killer herdsmen who use cattle rearing as a guise to perpetrate evil acts like kidnapping, killing, raping and burning of villages.

This has led to the issuance of quit notice by communities in the south to the herders and vigorous calls for gazing reserves.

In a post on his Twitter handle, Nnamdi Kanu claimed that herdsmen are refusing to graze in the north and relocating to the south because they are terrorists.

According to the pro-Biafra activist, the terrorists are only disguising as Fulani herdsmen.

Meanwhile, former Governor of Ekiti State, Ayodele Fayose has dismissed reports that he is plotting to join the All Progressives Congress (APC).

Speaking on Wednesday during the PUNCH Live interview, the former governor said he has no plans to leave the Peoples Democratic Party (PDP).

Answering questions on his rift with Governor Seyi Makinde, Fayose said he has no plan to join the APC or any other political party.